Behind the scenes of the New West Tourism Industry: Part 1 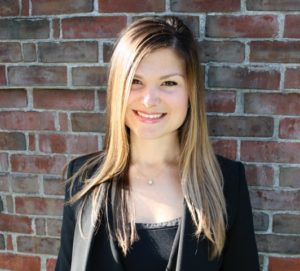 Over the past several years, Downtown New Westminster has seen some incredible and unprecedented growth with the development of the Anvil Centre, River Market and Westminster Pier Park – all of which are helping to create a vibrant and revitalized community with some of the city’s most unique experiences.

Of course, local events and programs are also a large part of what makes New Westminster so exciting and dynamic in helping to drive business and visitors to this particularly historic neighbourhood.

This is where Angie Whitfield comes in. As the Programs & Events Manager at the Downtown New West Business Improvement Association (BIA), Angie’s role is to “bring the community together” and support local businesses through various activities.

Since joining the BIA a little more than a year ago, she has worked on a host of events that include the Ultimate New West Shop Hop, holiday campaigns and others – all of which help to encourage business and visitation to the area from the Lower Mainland and beyond. 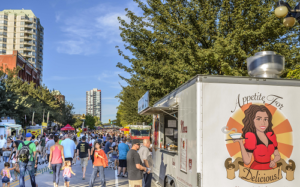 However, she says the event that draws the largest crowd and the most business year-over-year is the Columbia StrEAT Food Truck Fest – which also happens to be Canada’s largest one-day food truck event.

Now in its fifth year, the 2017 event will be held on Saturday, July 29 (4pm-10pm) and is expected to include nearly 100 food trucks and several beer gardens, and draw some 120,000 visitors to this daylong food fest.

“Events such as the Columbia StrEAT Food Truck Fest are a really great way of championing community, and showcasing this distinct part of the Lower Mainland to locals and visitors,” says Whitfield. “As a New West resident, I know first-hand how important community events are in bringing people together, and the City is very willing to do this and help us create significant shared connections – and support businesses in the area.” 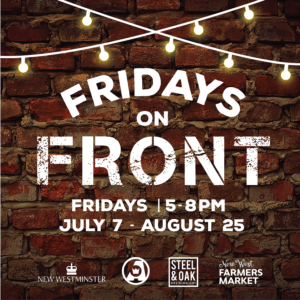 Adding to the impressive list of summer events in Downtown New West is the upcoming Fridays on Front weekly night market on the newly developed Front Street Mews, which takes place every Friday evening (5pm-8pm) from July 7th to August 25th.  Along with live music, the fully-licensed Fridays on Front will include food trucks, artisan vendors and a festival atmosphere befitting the warm summer season.

“Of course, Fridays on Front – and the food truck festival – are just a few of the many exciting events we have planned for the area this summer and throughout the year,” Whitfield explains. “To be honest, there’s so much going on here all the time and you only have to take a look at our events calendar to get a sense of it all. It’s just one of the reasons why I really enjoy living and working in New West.” 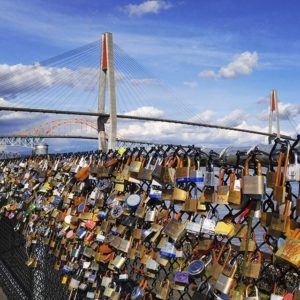 When asked about her favourite part of the job, Whitfield says she loves getting to know the personal side of the businesses that she’s been visiting, and being able to take things one step further by actually learning about their business and working with them directly on various events and programs.

What does Whitfield think is New Westminster’s best-kept secret?  “I would say it’s simply how rapidly the city is changing.  For example, 30 new businesses opened in Downtown New West last year – with each one contributing to the community in a big way. We’re seeing a lot of young keen entrepreneurs who are bringing a new outlook and energy to our neighbourhood.”

Established in 1989, the Downtown New West Business Improvement Association (BIA) represents the interests of some 400+ businesses and property owners stretching from the Fraser River waterfront up to Royal Avenue, and from the Pattullo Bridge to 10th Street.

Did you know? Tourism touches every part of our province and has become one of BC’s leading business sectors.