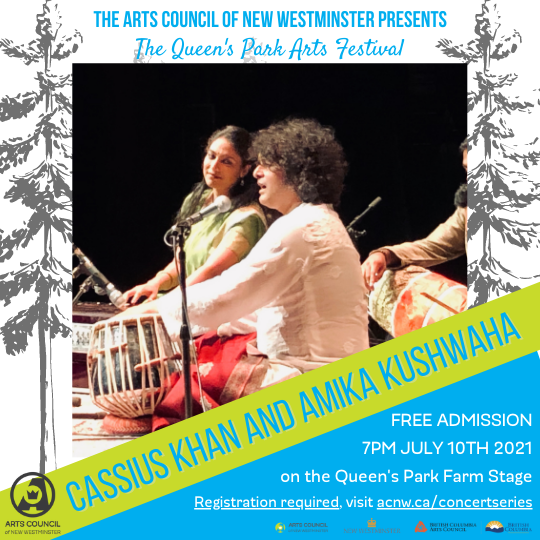 About the artist: Cassius Khan is a globally renowned Canadian Indian classical musician who uniquely plays the Tabla and sings Ghazal simultaneously and has been crowned the only professional performer who does so. Given the honorary title of “Ustad” or Maestro for this unique ability, Khan has toured the world and has lent his voice and hands-on numerous albums and performances of all genres with some of the world’s finest musicians. He is featured on a Nanak Foods TV ad and has received a large number of accolades including the 2005 Salute to Excellence Award From the City of Edmonton, a Juno Award nomination in 2008 alongside the late Slide Guitar Legend Ellen McIlwaine, a 2011 Western Canadian Music Awards nomination and the 2019 City of New Westminster Chamber of Commerce ‘Artist of the Year Award. Recognized as “Canada’s Multifaceted Musician” by the Edmonton Journal, at the young age of 18 Khan was recognized as the top 50 World Musicians in by Deutschlandfunk Radio in Europe and as one of Canada’s most influential musicians by CBC Radio 2. He has also performed twice for WIPO and the Permanent Mission of India to the UN in Geneva, Switzerland. Khan is endorsed by Sangeet Natak Akademi Award Tabla makers Ustad Qasim Khan Niyazi & Sons in Laxminagar, New Delhi as well as Aman Kalyan’s Australian based ‘Lehra Studio’ a smartphone app for Tabla players. He is an instructor of Indian music to Mulgrave School, the Curator of the “Massey Global Tea Series with Cassius Khan, “and is also the Founder and Producer of the Mushtari Begum Festival of Indian Classical Music and Dance which debuted in 2012 and takes place on the last Saturday of every September.
Www.cassiuskhan.com

The globally renowned Amika Kushwaha is a Canadian Kathak exponent who has learned the nuances of the Lucknow Gharana ( school) of Kathak. Her style is one of grace, beauty, fluidity of movement, as well as immense strength and stamina. In her performances Amika skillfully showcases her prowess on mathematically difficult compositions, her strong footwork patterns coupled with her graceful beauty in dance, thus creating her trademark “Poetry In Motion.” A 2005 Salute to Excellence award-winning, 2019 Bernie Legge Artist of the Year Award recipient, 2017 Shakti Award, 2011 Western Canadian Music Award nominee and 2019 Drishti Award recipient, Amika is a delight to watch on stage and seamlessly takes her audience on a wonderful journey of everyday and personal anecdotes all while performing fast footwork patterns, blinding pirouettes and elegant expressions, educating them on how life relates to Kathak. Asides from Kathak, Amika is a brilliant Harmonium player of par excellence with the unique ability to follow vocalists with her nimble fingers, note to note, or keeping the lehra, a timekeeping melody for Tabla or Kathak soloists that has accompanied some of the very best musicians of Indian music including the Khalifa of the Delhi Gharana Ustad Iqbal Ahmad Khan, and has performed for the Permanent India Mission to the UN and WIPO in Geneva, Switzerland in 2017/2018. She is also the Artistic Director of the Mushtari Begum Festival of Indian Classical Music and Dance, is a sought after dance teacher, adjudicator, composer, choreographer and holds an MsC in Chemical Engineering

About the venue: The Queen’s Park Farm is a casual outdoor venue in beautiful Queen’s Park, New Westminster. Hand washing, social distancing and other COVID-19 protocols will be in place.

At the Arts Council of New Westminster, we live and work on the unceded, traditional territories
of the Coast Salish peoples of the QayQayt (qiqéyt) Nation as well as all Coast Salish Nations.