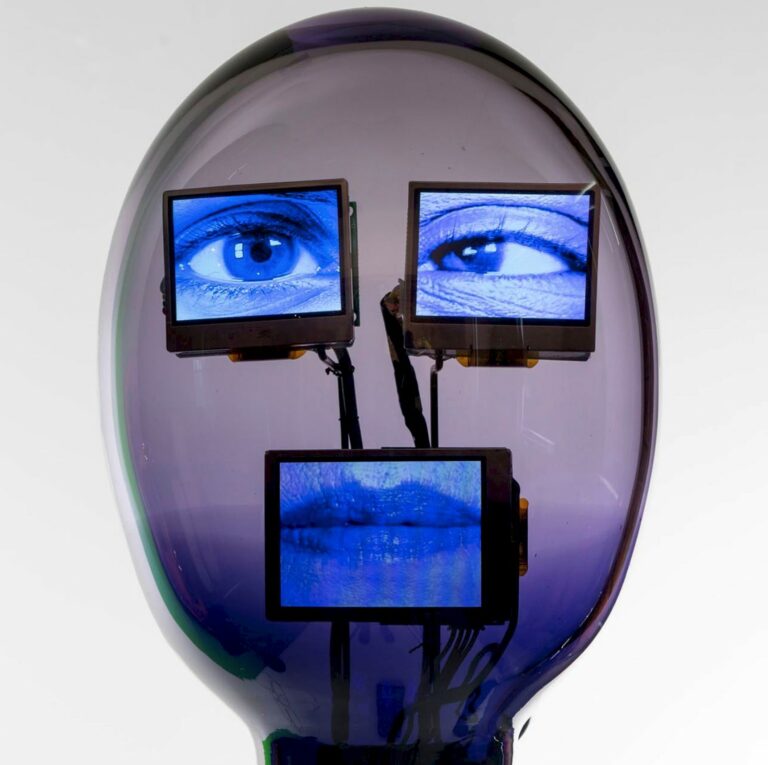 …people’s voices are more revelatory than their eyes or the looks on their faces […]: the vocalised sound goes from inside to inside, links two existences without further mediation.
Paul Zumthor

We are delighted to present four extraordinary artists who explore the complexities of the human condition through fragmented bodies and the human voice. The voice is a generic human practice with aesthetic, physiological, cultural, historical, and psychological texture and meaning. This is a portraiture of ideas, containing allegorical works with mouths that voice and communicate human behaviours, beliefs and fears. Singing, speaking, humming and whispering, they are delivered to us through a world of technology.

A pioneer of video and installation art, Tony Oursler’s glass-headed, AI b0ts have been inoculated with miniature video and sound technologies. Described as ‘Metaphors for alienated, isolated modern individuals in a technology-driven culture”, the bOts question our belief in the future of technology & AI, whispering, questioning and predicting dystopian futures.

Mellors & Nissinen present us with the absurd character Bad Mantras, from their grand political parody, The Aalto Natives (Venice Biennale). Attached to the wall of a ubiquitous recording studio, a mass of pink-felt, muppet heads, without a body, attempt a group hum while trying to play musical instruments together. Trapped on the wall, their tangled robotic arms reach out to attempt contact…and harmony.

Diemut Strebe gives us The Prayer, a disembodied, singing & speaking, rubber mouth with voice box; animated by artificial intelligence, powered by an algorithm that draws from world religious texts. The work was built at MIT around Diemut’s research question “How would a divine epiphany appear to an artificial intelligence?”.

Through unconventional and even pioneering artistic practice the artists in Mouthpiece habitually address a world of systems, narratives and beliefs; through absurd and surreal humour, satire, and parody or through scientific reasoning. Mediated through an aesthetics and physiology of the voice, we recognize this assemblage of capabilities, flaws, worries and efforts as poignant, funny, uplifting and all too human.