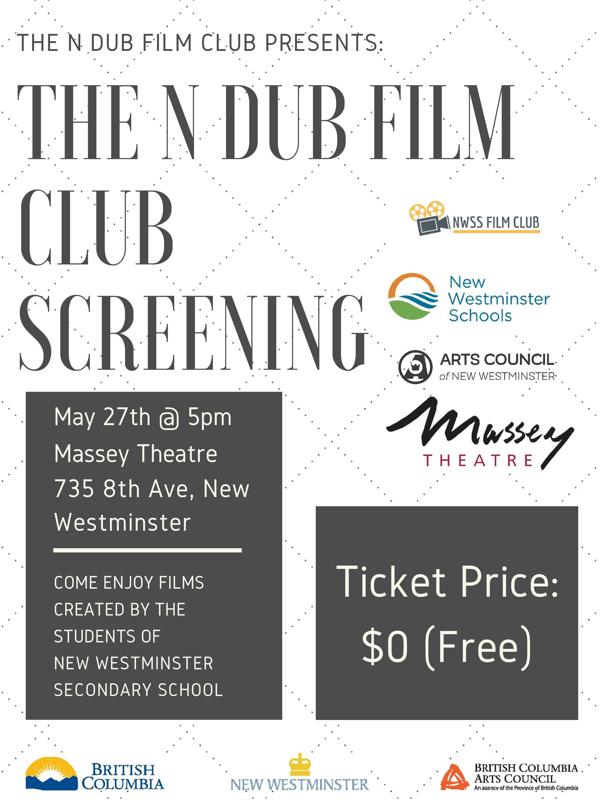 The Arts Council of New Westminster along with the Massey Theatre Society, New West Film Fest, and the N Dub Film Club is proud to present:

on Monday May 27th from 5:00-6:30pm on the big screen at the Massey Theatre. Screening a series of short films created during the current school by New Westminster Secondary Students from grades 10 through 12, the films will cover topics including climate change, mortality, friendship, and a humorous take on student life. Emceed by local author and former CBC personality, JJ Lee, the screening will include a Q&A session with the filmmakers. The event is free to the public to attend, however tax-deductible donations to the Arts Council of New Westminster are welcomed.

The Last Monday at the Movies film series will take place following the screening at 7:00pm, screening ‘Wild Rose’, a story of a musician from Glasgow with dreams of becoming a Nashville star.

Last Monday at the Movies movie series that takes place at the Massey Theatre in New Westminster, B.C. on the last Monday of each month. Last Monday at the Movies is a celebration of independent film showing the best of the Toronto International Film Festival Film Circuit. Now in it’s 17th season, films take place between September through June, excluding December. The films start at 7:00pm and are followed by Last Word, a post-film talk discussing the film’s topic, taking place directly after the film in the Plaskett Gallery.

For more information about films and how to purchase tickets, visit the website: acnw.ca/movies