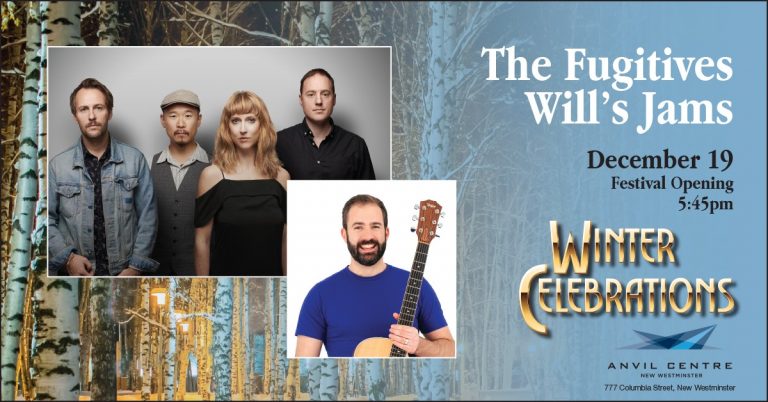 Winter Celebrations starts off on Dec.19th at 5:30pm with a performance of renowned Will’s Jams, a musician and educator of kids music – loved for his original rock, folk, and blues music and renowned Canadian folk music group, The Fugitives.

Will’s Jams (5:45-6:45)
Will Stroet of Will’s Jams is the ultimate star of kindie rock! A JUNO-, WCMA- and CFMA-nominated musician, CBC Kids, Universal Kids and KidoodleTV star, educator and dad, he’s well-loved for his original rock, folk, and blues music with witty wordplay and catchy choruses. For more than a decade, Will’s been entertaining kids through his bilingual music in English and French, inspiring them to be active, healthy, creative and engaged in the world. This spring, Will released his 10th album, “Rocks and Roots,” a celebration of nature and the outdoors, and, this fall, will premiere his Will’s Jams symphony show with the 67-piece Winnipeg Symphony Orchestra.

Will first discovered his talent for writing kids music while completing his education degree at the University of B.C. After releasing his first album in 2005 and playing hundreds of shows around Vancouver, Will knew he had found his calling. In 2009, he took leave from teaching to pursue music full time and has never looked back. Over the years, Will has performed nearly 2,000 shows across Canada and in China in theatres, festivals and schools, and garnered national recognition for his English and French albums, including a 2017 JUNO nomination, six Western Canadian Music Award nominations, two from the Canadian Folk Music Awards and two from the Sirius XM Indies. In 2015, UBC’s Faculty of Education honoured Will in their top 100 Alumni awards, along with Prime Minister Justin Trudeau.

The Fugitives (6:45-8:00PM)
The Fugitives, established in 2007, have released four records, which have been nominated for multiple Canadian Folk Music Awards and a Western Canadian Music Award. Their previous album, Everything Will Happen, spent ten weeks on the top ten Canadian folk charts, and earned them a support slot across Western Canada with Buffy Sainte-Marie and an appearance at UK’s Glastonbury Festival. Their follow-up, “The Promise of Strangers”, is set for release on January 26th on Borealis Records.
A folk collective headed by songwriters Adrian Glynn and Brendan McLeod, the band has toured extensively through Canada, Western Europe, and the UK, often joined by renowned multi-instrumentalist Steve Charles, violinist Carly Frey (Echo Nebraska), and banjo player Rob McLaren (Union Duke). Over the past ten years, they’ve earned a reputation for unforgettable live shows, brimming with complex harmonies, infectious storytelling and top-notch musicianship. As the CBC has it: “This show is simply brilliant”. Performance highlights include major folk festivals across Canada, headlining slots in overseas americana festivals, and a recently sold out run across the UK on its rural touring circuit. In 2018, the band will tour across both Canada and the EU, and venture into the United States via an official showcase at Folk Alliance.