Behind the Scenes of the New West Tourism Industry: Part 4

Brewing it up at Steel & Oak 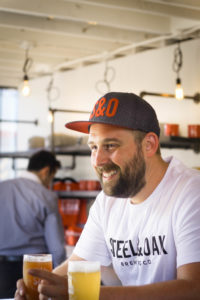 When business partners Jorden Foss and Jamie Garbutt first opened the doors to Steel & Oak on June 23, 2014, the intention was to simply follow their passion for brewing European-style craft beers.  What once began as a hobby of creating small batches of beer in their backyards has now developed into a full-grown business with a staff of nearly two dozen.

Without hesitation, Jorden Foss largely credits the success of his business to the city that he was born and raised in: New Westminster.  As far as Jorden and Jamie are concerned, the City of New Westminster was the only option for their new venture.

“Steel & Oak is a labour of love, and we’re as local as it gets – we really do bleed New West and we also knew that we would be very well received here,” Jorden says.  “It’s a tight-knit community that helps and supports its own, and we – in turn – wanted to give the community a new place to come and hangout, somewhere kind of relaxed and cool.” 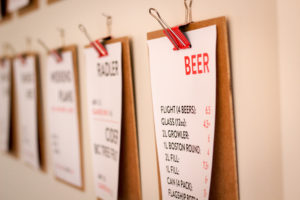 Indeed, the community has come out in support of this new venture – and in droves. As an example, during its first year of business, Steel & Oak brewed about 50,000 litres of beer.  Today – less than three years later – that number has expanded ten-fold to 500,000 litres per year.

Not only is Steel & Oak the only brewery in New Westminster, but it’s also one of only a few that locally specializes in crafting German-style beer.  Because of this, Steel & Oak has also found its niche in the wider markets of Vancouver, Vancouver Island and BC’s interior, as their signature European lagers and hefeweizens have quickly set them apart from other breweries crafting West Coast and North American-style beers. 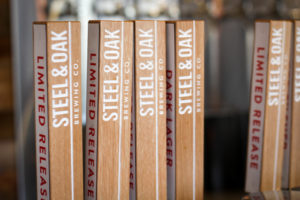 “We didn’t know how well received our beers or our Tasting Room would be, but it’s been incredibly busy almost from the very beginning,” Jorden adds. “Our first month or two, we actually ran out of beer so we had to quickly add capacity and we’ve grown a lot – beyond what I had ever imagined.”

When asked about his favourite part of the job at Steel & Oak, Jorden revealed two clear answers. The first, as might be predicted, is sampling the new beers made by his team – “especially,” he says, “when they knock it out of the park.”

The second, he explains, is the pure joy and satisfaction he gets from quietly listening and watching his patrons enjoy nearly every aspect of the intimate Tasting Room and the range of beers.

“That’s one of the best parts of the job,” he says.

As for New West’s best-kept secret?  Jorden has two.

For something tangible that you can see and do, he cites Landing Park in the Sapperton area.  This eight-acre regional linear park sits along the Fraser River and offers a scenic one-kilometre walk with bridges, benches and views of marine birds and tug boats along the way.

New West’s second best-kept secret, in his opinion, is the city’s arts scene. “Most people don’t realize how many artistic and creative types have moved into New West over the years.  There’s always something cool happening here, whether it’s live music, performances, art shows… there’s a big creative scene that might be hard to see at times, but it’s here.  It just needs to be experienced.” 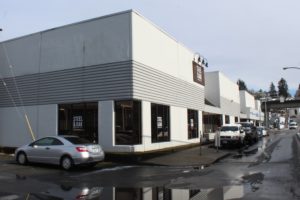 You can find Steel & Oak at 1319 3rd Avenue, less than a two-kilometre drive (or a 15-minute walk) from the New Westminster SkyTrain Station.