The charming New West neighbourhood of Queen’s Park is one of the city’s first suburban areas and is home to some of the oldest heritage houses in the province. Characterized by classic, single-family homes, this community is prominently composed of houses from the 1860s to 1920s with some homes having been added in the 1930s and 40s as well. Whether you’re an architecture enthusiast or a casual admirer, you’ll surely enjoy our roundup of heritage houses in Queen’s Park. Get out and explore the area as you follow along with our self-guided walking tour!

As a friendly reminder, keep in mind that all of the houses on this tour are the residents’ homes and to please respect their privacy and property. 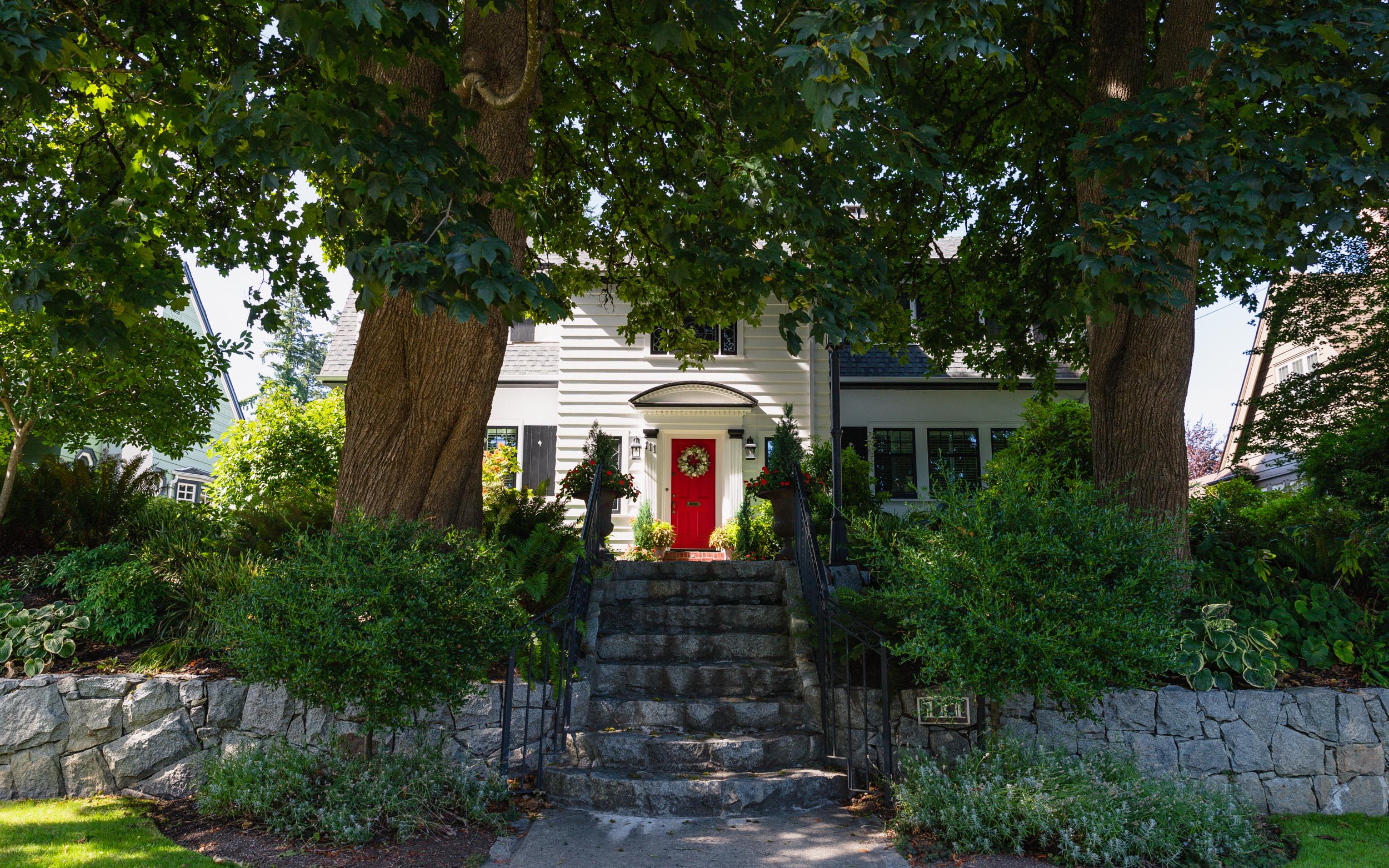 Our tour starts on Queens Avenue—a street lined with some of the most beautiful houses in New Westminster. 111 Queens Avenue, a 1930s house first owned by E. M. Philips, showcases the symmetry that characterizes the Colonial Revival architecture style, with an equal number of windows on either half and an entrance in the middle. A central block sits under the shed-style roof that accentuates the entranceway. This house is also highlighted in our TV & film locations of New West self-guided walking tour as Betty Cooper’s house in the Netflix Original show Riverdale. 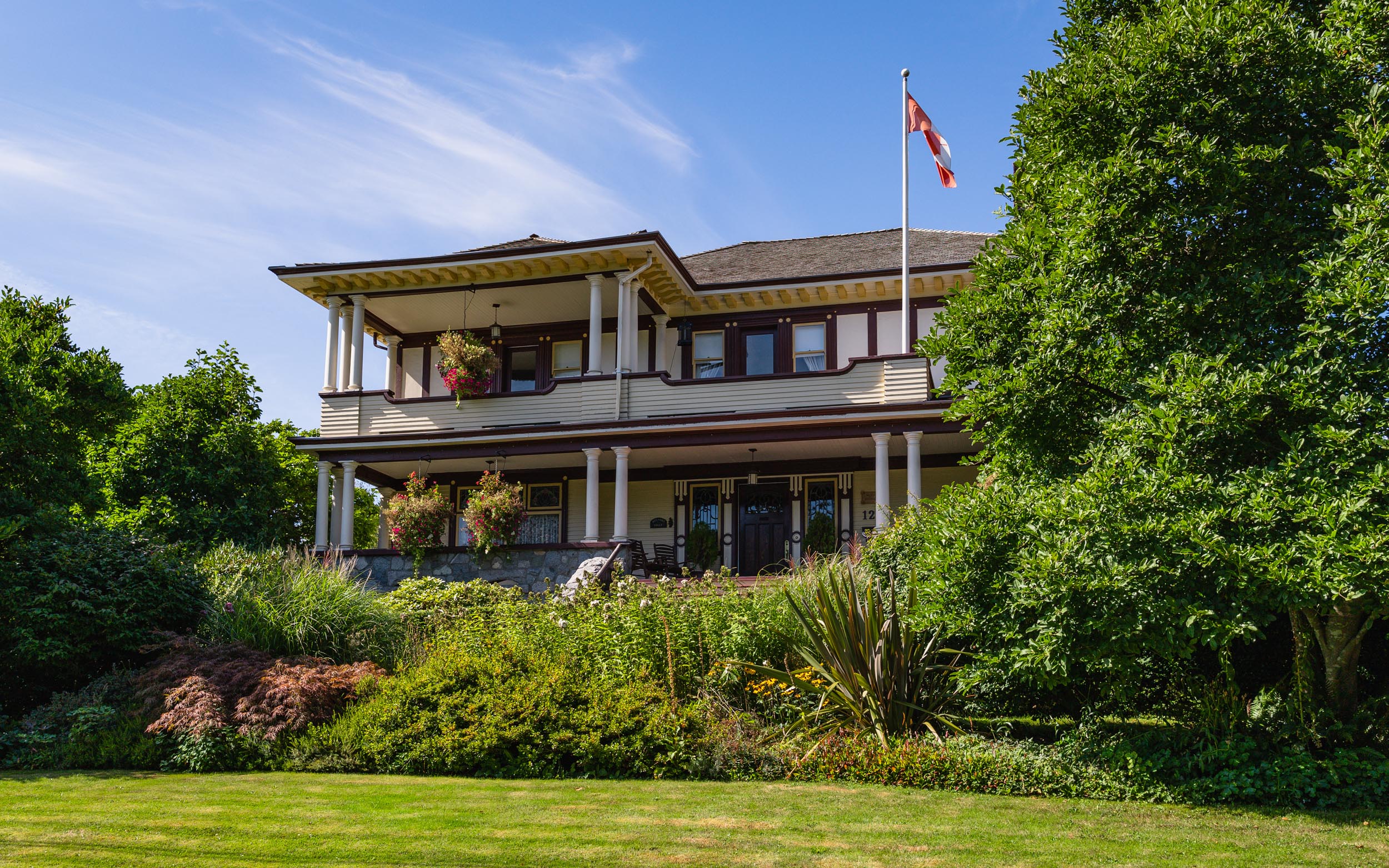 Continue down the street to 127 Queens Avenue. The first resident to live in this 1913 house was Westminster Brewery owner, Nels Nelson. The house design features many elements that are typical of the Prairie style: strong horizontal emphasis, a low pitched, hipped roof, overhanging eaves and grouped column porch supports. The large corner lot is beautifully landscaped, which only adds to its heritage value. 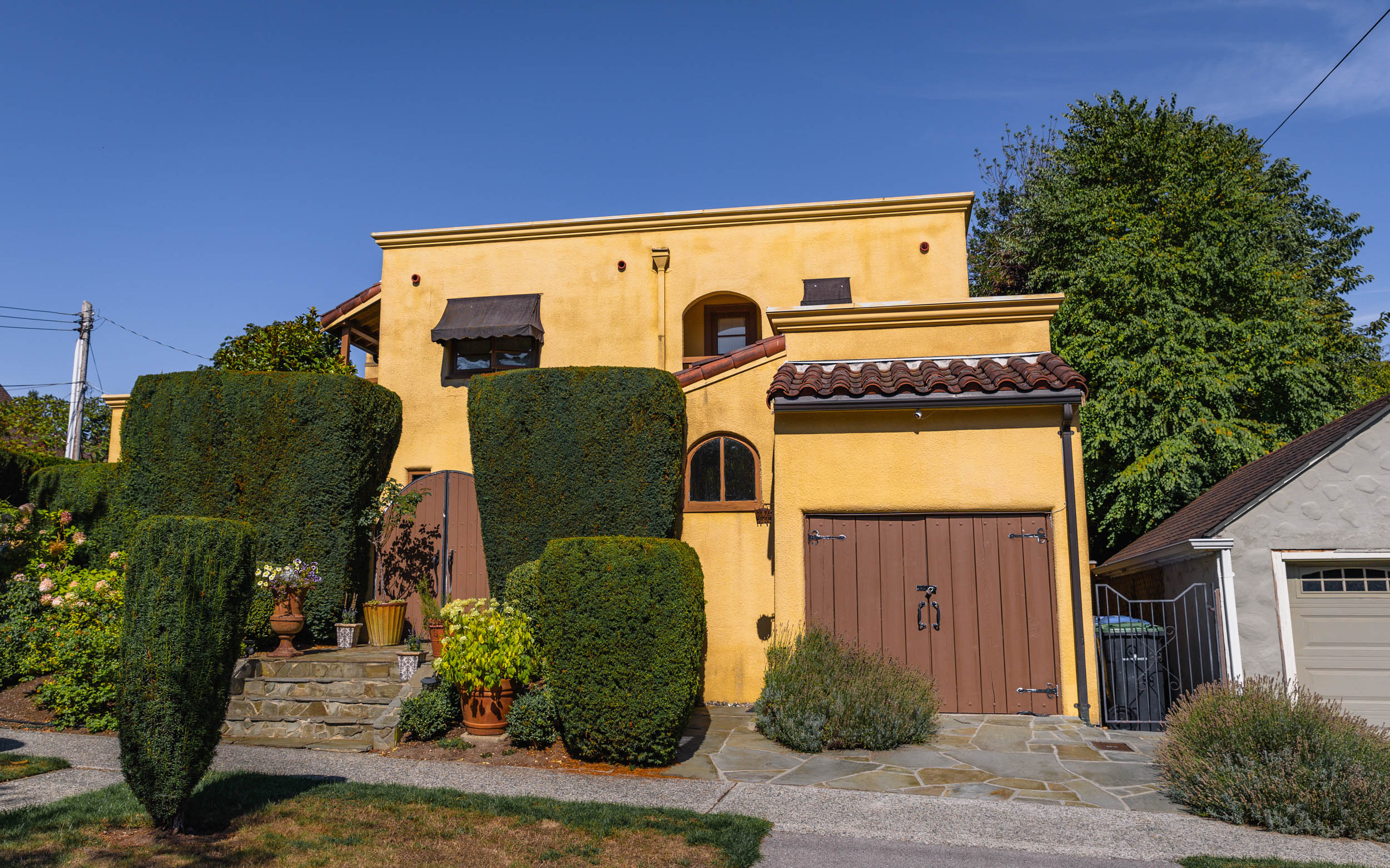 At the corner of Tipperary Park, take a right turn. Just up from the corner is the yellow house at 215 Third Street, which almost looks out of place in New West. This Spanish Eclectic style house was built in 1941 and features a flat roof, tile-covered roof extensions, arched doors, arched windows and a second-floor balcony. The house is one of just a few Spanish Eclectic-style homes in New Westminster. 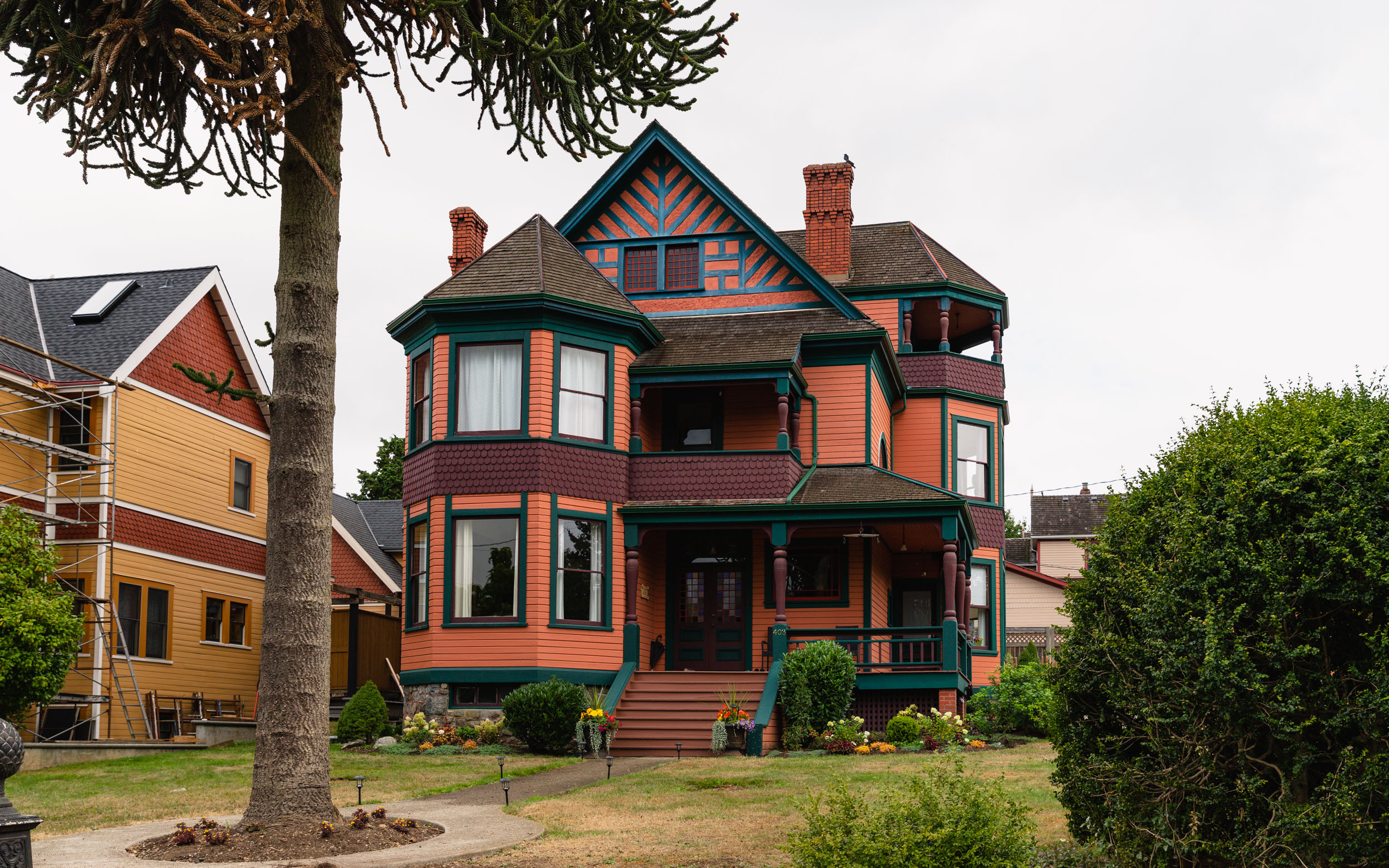 Continue down Liverpool Street and take a right on Fourth Street. On your left will be 403 St. George Street, designed by architects Maclure and Clow and built in 1890. The house was built for Charles Murray but later Walter Gilley of the Gilley Brothers Company lived in the house from 1909 to 1935. Features of the Queen Anne design style include a cross-gabled roof with multiple levels, creating an irregular and uneven roofline. The house contains some of the earliest Bloomfield glass in British Columbia.

At this point in the tour, we suggest taking the exploration into your own hands. Take some time to walk up and down the neighbourhood’s streets while checking out the dozens of heritage houses. Fourth Street, Fourth Avenue, Second Street and all the roads in between are packed with beautiful homes, many over 100 years old! 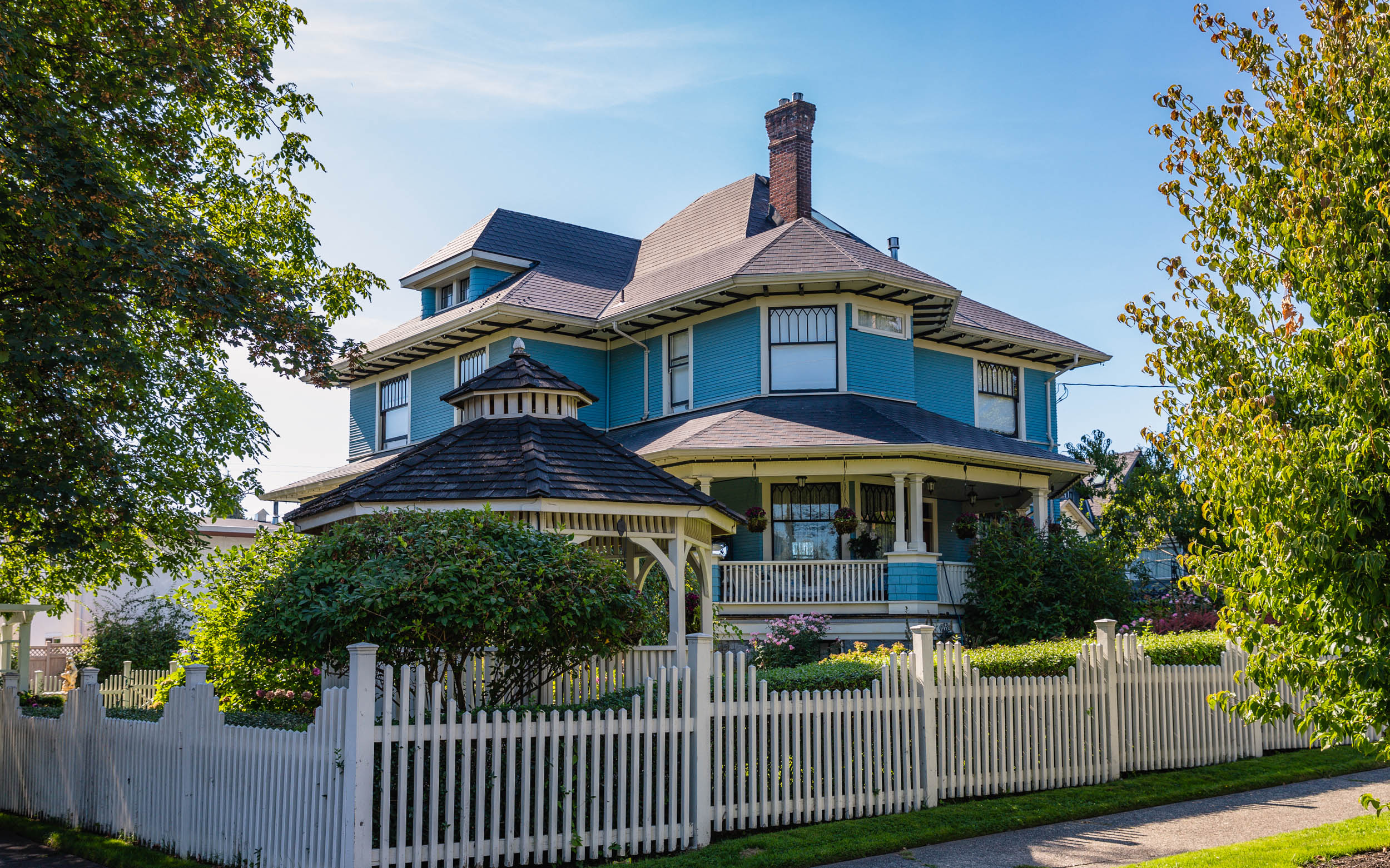 After exploring the neighbourhood on your own, head to the intersection of Third Avenue and Third Street where you’ll see a large blue house. This house was built in 1898 for H. T. Kirk, who was a local hardware merchant in New Westminster. The home was built in the Classic Box style, with further structural additions being added such as the wraparound porch, turret-like corner and multi-level roof. Major changes took place in 1910 when the home’s east façade and front porch were rebuilt with their current curved shape. 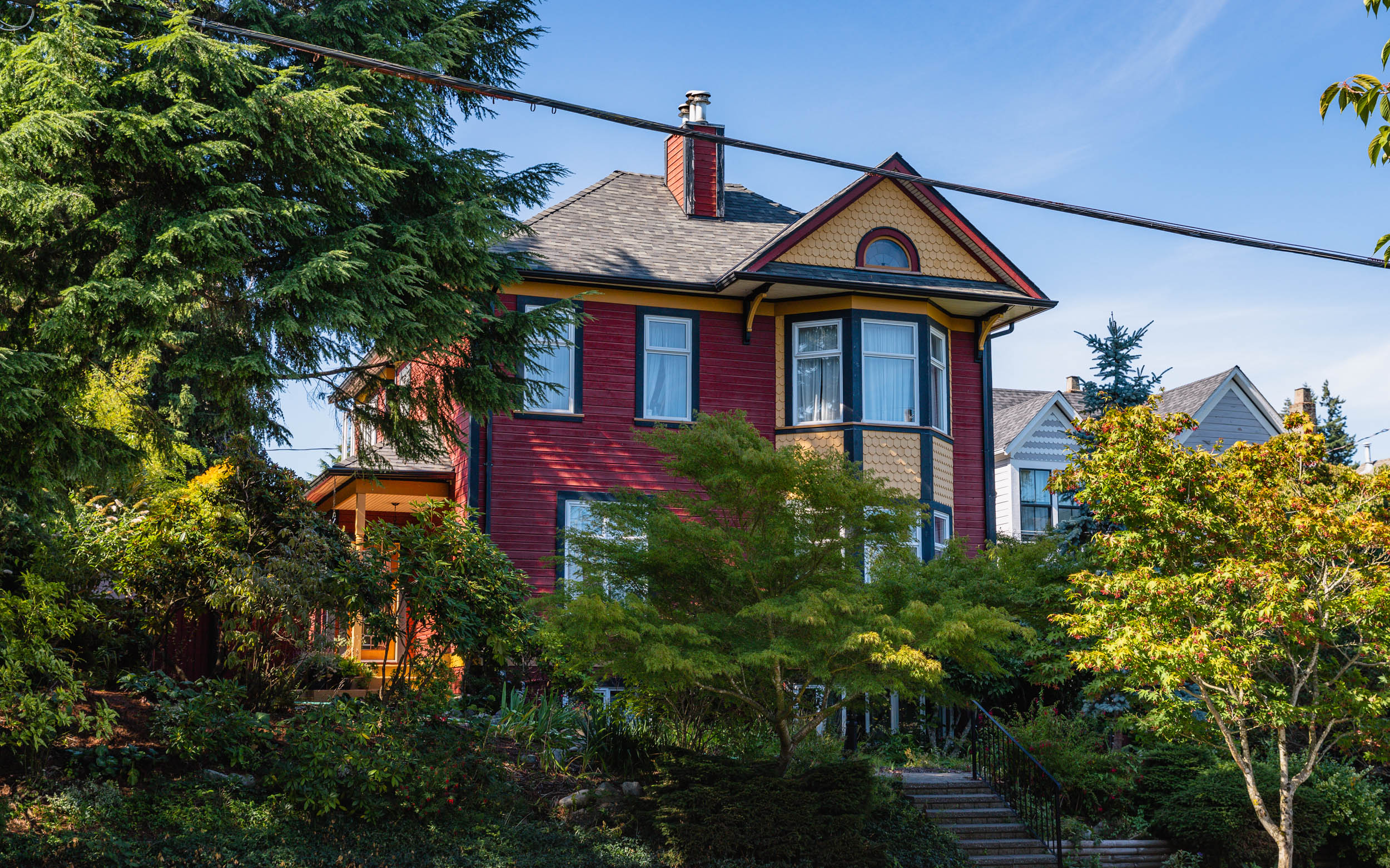 Head straight down Third Avenue and past the intersection at Second Street until you arrive at 121 Third Avenue. Built in 1905 in the High Victorian Period, this house was first owned by Reverand J. T. White, a Methodist minister. While the home is covered in modern siding, it still has the basic form of the original Queen Anne design style. The home features two stories with a hipped roof and cross gable emphasized by decorative shingles and a round, arched window.

If you’re following the path of our self-guided tour, you’re now less than one block from the Third Avenue entrance to Queen’s Park, which is the perfect spot to spend the day outside in the city. For a list of all the activities that you can take part in when visiting Queen’s Park, check out our blog here. Be sure to share your experience on social media using #MadeInNewWest!